China is methodically building the world’s most ambitious carbon market

On December 19, China officially announced that it would create the world’s largest carbon trading system, meant to help the country meet its ambitious climate change and clean energy targets. (The country wants to get 20 percent of its energy from renewables, and peak its emissions, by 2030.)

It can be difficult for Americans, most of whom don’t track China’s carbon policy very closely, to understand the significance of such developments, so let’s try to put it in context.

To make a long story short: Yes, a comprehensive carbon trading system covering the world’s largest emitter will, eventually, be a Very Big Deal. But Tuesday’s announcement was neither the beginning nor the completion of that effort, only a signpost on a path that the country is navigating with great care.

It’s an exciting signpost, though!

China is building its carbon trading system slowly and deliberately

Back in 2011, China’s government laid out a plan to gradually create a national carbon market. (It appeared in the country’s 12th Five-Year Plan, covering 2011-’15.) The key word here is gradually.

Over the ensuing years, the country established several provincial and city-level carbon-trading pilot projects, with varying rules, scopes, and baselines, to test-drive the concept.

Tuesday’s announcement confirmed China’s intention to move beyond pilot projects to a bona fide national system. Originally, the (insanely ambitious) plan was to expand the system to cover the entire Chinese economy in 2017, but on Tuesday leaders revealed that it will initially cover only the electricity sector — big coal and natural gas plants — which represents about a third of the country’s emissions.

Even trading in the power sector will not begin immediately, however. A few years will be spent gathering and verifying data on plant-level emissions, establishing rules and baselines, engaging in “dummy” trades as a stress test, and generally setting the table. Actual trading, with money changing hands, will begin in 2020. The system will expand to cover other sectors like steel, concrete, and aviation at some unspecified post-2020 date.

China has confirmed that there will be a carbon trading system, but the vast bulk of the important operational details remain unknown.

Most notably, the country did not say where it would set its carbon cap. This is obviously a key feature, since it determines the environmental effects of the system. And it’s particularly fraught in China’s case, because emissions are already slowing based on economic shifts and other policies. If the cap is too high/cautious, as has been the case in virtually every other cap-and-trade system to date, carbon prices will stay low and the system won’t have much effect. (This is arguably true of the EU’s system; it moves lots of money around, but the cap is so weak that other, national-level policies are doing more actual carbon-reduction work.)

Other important details also went unspecified: There’s no word on how many allowances will be distributed for free versus auctioned, what baselines and procedures will be used, or how the system will fit with China’s many other non-market policies to reduce emissions.

These may seem like wonky details, but existing cap-and-trade systems have arguably botched them. China has been in intensive discussions with representatives from California and the EU, seeking to learn from their mistakes.

So that’s where we are: a power sector trading system, up and running in 2020, with an unknown cap and unknown rules, which will expand further at some unknown date. What to make of all this?

Coverage of China’s announcement has been a little, uh, heated. 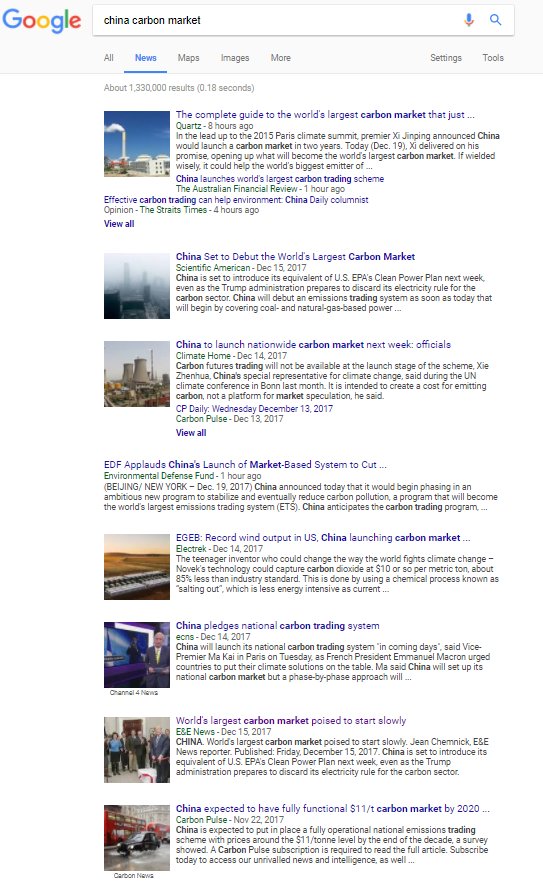 Not one word yet on content of China’s carbon market announcement but the hype train has already left the station and disappeared in the horizon. Let’s see first what is actually getting announced.

Conservatives are, of course, heavily invested in the notion that China is faking and/or failing on climate policy — it’s long been one of their primary justifications for opposing ambitious US climate policy. It was one of Trump’s rationales for pulling out of the Paris climate agreement.

But climate hawks are equally invested in the notion that China is racing ahead, since that serves as a cudgel with which to attack conservatives. They have considerable incentive to lionize China.

I think the right take here is some version of cautious optimism. Climate hawks have the better of the argument — China is deadly serious about cleaning up its energy system, not only or even primarily for climate reasons — but conservative warnings about China’s history of opacity and cronyism are worth heeding.

The key thing to remember is that China’s government thinks long term. (There’s nothing in China like vertiginous Obama-Trump transitions, needless to say.) It is planning for the rest of the century, for China to become a leading global power, especially in clean energy. Relative to the scale and scope of the task at hand, taking a few more years to get it right is a small sacrifice.

The other thing to remember is just how mind-bogglingly huge the challenge is. China is really, really big. It has grown, since 2000, from a poverty-stricken backwater to the world’s largest economy, mainly powered by coal. It is attempting to create a modern economy and a modern government in a fraction of the time it took wealthy Western nations to do the same. The effects of rapid growth are everywhere, especially in the central government’s scramble to bring far-off provincial governments in line. In many cases, the central government lacks data on what is emitting what, and where — such data is often massaged or manipulated by companies and provincial leaders over which the central government still has only tenuous control.

China’s government is acutely aware of the importance of its carbon efforts, both politically and environmentally, and of the daunting challenges it faces in creating one. So despite the urgency of the climate challenge, its highest imperative is not speed. The most important thing is getting the baselines, rules, and procedures right, creating a functioning system that can be used as a ratchet for decades to come.

In 2020, China will issue two important documents: its next Five-Year Plan and its updated NDC (its pledged targets under the Paris climate agreement). The international climate talks being held in 2020 will be the first chance for countries to increase their ambitions and ratchet up their original NDCs. All eyes will be on China.

Getting a stable, effective carbon trading system in place — even if the initial cap is weak, as it likely will be — could help embolden China to set a more ambitious timeline for peaking its emissions, perhaps 2025 or even earlier. Moving up a peak by five years may not sound like much, but for the world’s most populous country, its largest economy, and its biggest emitter, that represents the emissions equivalent of several small countries going to zero. It would be a seismic development, bolstering other countries to boost their ambitions in turn.

Anyway, we are impatient here in the US, but the fact is, China is moving deliberately and cautiously on this. And that’s good news. If China gets carbon trading right, the effects — direct effects on emissions and indirect political effects — will be beyond calculating. The more care, the better.