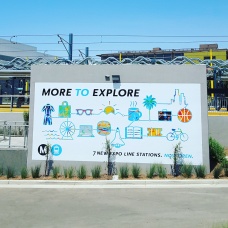 In summer 2016, two compelling forces converged in Santa Monica to move people in healthy directions.  One was the unrelenting energy of youth.  The other was the Expo light rail line driving westward to the Pacific Ocean and the Santa Monica Bay.  Youth-power and rail-power, a tantalizing tandem, could help lighten the community’s carbon footprint.  Climate Action Santa Monica set out to align these forces by initiating a “Climate Corps” to be a visible climate presence in Santa Monica on summer weekends with a focus on the climate-friendly public transit choices people have, starting with the advent of the Expo line.

To help celebrate the opening of the Expo light rail, promote GoSaMo, the City’s

transportation campaign, and provide a climate lens to riding the light rail, Climate Action Santa Monica initiated the CASM Climate Corps© as a pilot program.  Three main purposes focused the endeavors:
1.  Be a community resource to promote GoSaMo, particularly for Santa Monica’s residents and workers, to share the public transit choices an show how the transit system works and how to use it.
2.  Conduct meaningful conversations about using public transit, specifically the Expo, instead of cars and the significant climate impacts of that use.
3.  Collect survey data on ridership, transit choices and climate change.
To build a vibrant cadre of Climate Corps, CASM reached out to upper division high school 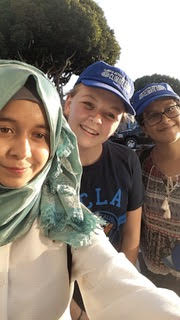 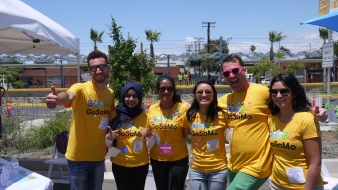 Applicants had a chance to participate in a low-key manner with volunteer student leader-interns from Sustainable Works who partnered with CASM to test-run the Climate Corps concept on Saturday, May 21, 2016 as part of Santa Monica’s community welcome to Expo riders at Metro’s “Station Parties.”  That opportunity enabled applicants to see whether the responsibilities would suit them.

With the support from the City of Santa Monica, County of Los Angeles, and Metro, in the

summer of 2016, thirteen CASM Climate Corps© youth (ages 16 – 25) set out for six weeks, mostly on weekends, to engage Santa Monica residents, visitors, workers and students in meaningful conversations about the variety of low-carbon transit choices that are possible for them to get around the local community and region.  The CASM Climate Corps team helped people learn the practical and climate related reasons for catching the Expo, riding a Breeze or personal bike, using the Big Blue Bus, or walking from place to place.

In making contact with almost 1000 people to assist them and surveying 594 individuals or families for feedback to the City (and Metro), the CASM Climate Corps has had a productive and positive impact, offering what Corps member Zoe called a “face” of the City.  Impressively, the youth have also related that being a part of the Climate Corps has impacted them personally, as Corps members Leo asserts in a “life-changing” manner, opening up new opportunities, strengthening their leadership, and influencing them to assume more environmental or sustainability pursuits in their studies or career choices.

The 2016 CASM Climate Corps Team came from diverse backgrounds, ethnicities with a broad range of experiences.